So I had a jonesing for chicken and dumplings. I started the other day by tossing about 3 chicken carcasses with some meat into the big slow cooker to make stock. Let that simmer all day and then strained out the bones and meat and put everything in to the fridge over night.

Next day I took the resulting chicken jello (the stock was perfect) and put it into a pot to simmer on the stove. Once it was going I tossed in boneless, skinless chicken thighs, dehydrated Walla Walla Sweets, dehydrated broccoli and dehydrated yellow squash that I chopped up to disguise they were squash slices. I also added some salt, pepper and basil and let it simmer.

I then peeled what meat was left from the carcasses and set that aside in the fridge since I didn't want them to cook too much longer since it has simmered quite a while the day before.

I then puttered about the web looking for gluten free dumpling recipes that used the ingredients I had on hand. I found a few that were doable so I came up with my own recipe using the info I found:

Mix the dry ingredients together and then add the eggs and mix thoroughly. Let the dough sit and rest for about 15 minutes. Drop by big spoonfuls into the simmering liquid and cook uncovered for 10 minutes. Cover and cook for an additional 10 minutes. I did sprinkle pepper on top before I covered the pot.

While the dumpling dough was resting I thickened the stew with rice flour to make a nice gravy when everything was done.

I grew up with Bisquick dumplings and that is the texture I am used to, so the denser texture of the gluten free dumplings took some getting used to. They were quite tasty and not too dense (I've made from scratch dumplings in the past with regular flour that could kill you if you got hit with one), but not as fluffy as I would have liked. The hubby liked them and he isn't a big dumpling fan. He felt they needed something added tho, I sprinkled a bit of adobo seasoning on his 2nds and he thought they were perfect.

So I will look at tweaking the recipe a bit for future meals and look forward to having lots of dumplings for various meals (turkey and dumplings, beef and dumplings the variations are endless).
Labels: chicken dumplings gluten free 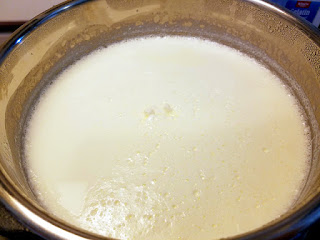